In this week’s “Portfolio Watch”, we’ll do an update on a couple of topics that we’ve examined in past issues.

We’ll begin with our forecast from earlier this year that at least 1/3rd of colleges and universities would close within five years.  While COVID has impacted enrollment at institutions of higher learning, problems existed in the higher education world prior to the lockdowns imposed in response to COVID.

For several years we have been forecasting big changes in higher education.  The primary reason for this forecast was the huge amount of student loan debt that existed and continued to build.  Once one understands the anatomy of a price bubble, they become easy to recognize.  Tuition rates at colleges and universities have been rising at rates much faster than prices for just about every other category of spending.

This rapid rise in tuition rates has been fueled by access to easy credit in the form of student loans for virtually any student who wants one.  Easy credit is rocket fuel for price bubbles.

While price bubbles are easy to recognize, the timing of when these bubbles burst is much more difficult to predict.  Bubbles can often build for a much longer time frame and to much higher levels than one would ever think is possible.

As we have stated, COVID simply exposed where weakness already existed, not just in higher education, but in many areas.

As far as higher education is concerned, there is evidence that the bubble may be about to unwind.

Take, for example, the 2020 fall semester, the number of first-year undergraduate students are in freefall across the country, down 16%, when compared to 2019 fall semester, according to a new report by the National Student Clearinghouse Research Center (NSCRC). Overall undergraduate enrollment slid 4% from this time last year, mostly because of the 13.7% drop in international students.

Naked Capitalism's Yves Smith points out that virus-related enrollment declines are happening at a time when colleges and universities' revenues were already slumping, potentially creating a perfect storm of campus closures.

"Empty seats are inflicting financial damage on colleges already reeling from the pandemic. Earlier this year, when the virus began spreading, many schools cleared their campuses of students and refunded housing costs. With enrollment warning, revenue from tuition, dormitories and dining halls is being hurt at a time when some institutions are posting low endowment returns," Bloomberg said.

Jack Maguire, the founder of the enrollment-consulting firm Maguire Associates and former dean of admissions at Boston College, warned that "colleges are losing billions of dollars" as the virus continues to rage across the country.

"It may not be the end of it if this new wave hits and students are sent home again," Maguire said.

Despite undergraduate enrollment down across all types of institutions, private for-profit colleges recorded a 3% increase.

Rapidly declining enrollment numbers will make it difficult for many colleges to survive.

In past issues of “Portfolio Watch”, we have also been taking an in-depth look at the ultimate end result of the massive money creation now taking place.  If you’ve been a longer-term reader of this publication, you know that we have forecast a future reset which will be reactive as occurred in Zimbabwe and Weimar, Germany or proactive like the worldwide currency reset in 1944 as a result of the Bretton Woods agreement.

This week, we wanted to draw your attention to an article penned by past radio guest, Alasdair Macleod.  In the article (Source:  https://www.goldmoney.com/research/goldmoney-insights/hyperinflation-is-here), Mr. Macleod states that hyperinflation is already here.

Here is a bit from his piece (emphasis added): 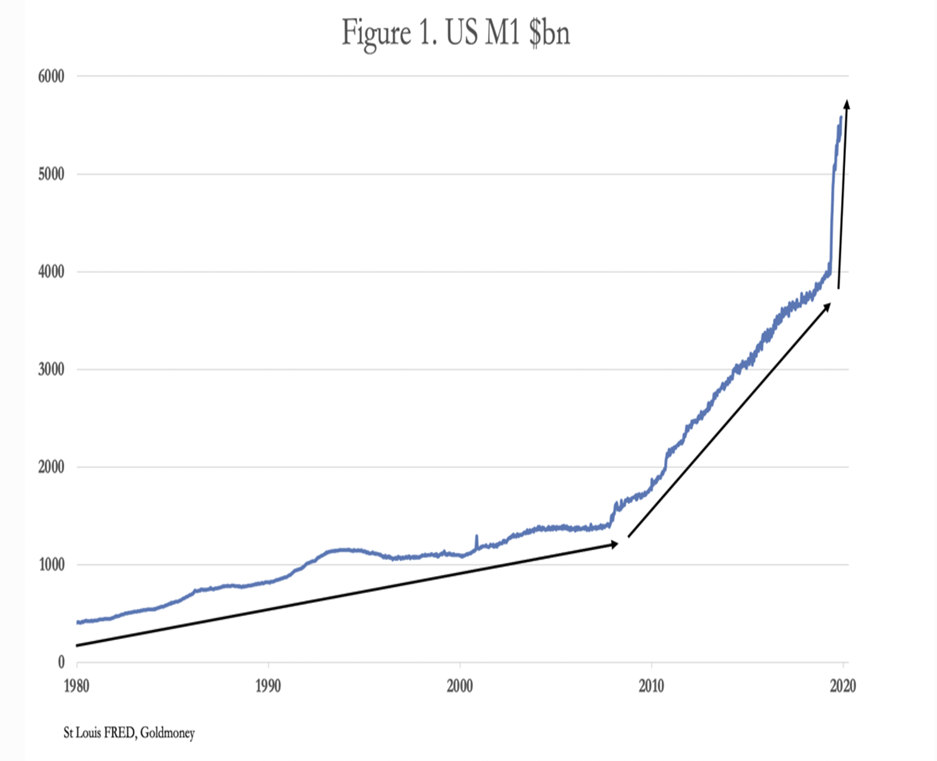 The progression of annualized monetary inflation from under 6% before the Lehman crisis, to 9.6% subsequently until March this year, and 65% in the thirty weeks since is clear from the chart. If the monetary authorities have the knowledge, the mandate, the authority, the ability and the desire to stop inflating the currency, we would not describe it as hyperinflation, instead deeming it to be no more than a brief period of exceptional inflation before a return to sound money policies.

But sound money was emphatically discarded in 1971, when the post-war Bretton Woods agreement was finally abandoned — not that the monetary regime at that time was in any way sounder than Adam’s fig leaf was an item of clothing. For the fact of the matter is that sound money in America was arguably abandoned long ago, with the founding of the Fed at Jekyll Island before the First World War.

As a means of funding government deficits, inflation is capable of being stopped by cutting government spending and/or raising taxes. But now, a one-off increase of 65% of narrow money is to be followed by another massive expansion already in the wings. The hope is that that will be enough, just as the original 65% increase in M1 was hoped to be enough to ensure a V-shaped recession would be followed by a return to normality.

Mr. Macleod notes in his article that senior Fed economist, Michael T. Kiley concluded in August that quantitative easing (money printing) in an amount equal to 30% of US Gross Domestic Product (GDP) would be needed to deal with the Coronavirus.  In rough terms, the Fed has already created about $3 trillion in new money this year; that means there could be another $3.5 trillion coming to fund additional stimulus.

In his article, Alasdair points out that the US Government’s annual operating deficit, when calculated since March of 2020, is about $4.4 trillion.  That’s a number that is significantly more than tax receipts.

Mr. Macleod notes in his piece that these already scary numbers are likely to get worse (emphasis added):

If these conditions persist in the new fiscal year — which seems increasingly certain, Kiley’s calculation of the further $3.5 trillion stimulus underestimates the problem. According to an op-ed by Allister Heath in today’s Daily Telegraph, Larry Summers, the US economist and arch-inflationist, believes that the cost of covid-19 will reach 90% of US GDP, substantially more than Kiley’s estimate of 30%. Over-dramatic perhaps; but can we envisage that the forthcoming stimulus package, and then undoubtedly the one to follow that, will restore normality and set the budget deficit firmly in the direction towards a balance? If the answer is no, then we already have hyperinflation.

The effect of changes in the general level of personal liquidity is potentially a more important influence on the level of prices than the quantity of money itself. It should be evident that if the increased quantity of money in circulation is simply hoarded, there will be no effect on the general level of prices. Alternatively, if the public decides to abandon a state-issued currency, irrespective of the quantity in circulation it will lose all of its purchasing power.

The abandonment of a state-issued currency by the public terminates all hyperinflations and once the process is under way it tends to be rapid. In Weimar Germany, it was said this flight into goods and out of money began in May 1923 and lasted to mid-November. In the other European nations, which suffered collapses of their currencies in the early 1920s, the final process was equally swift.

This week’s radio program features an interview with prolific author, Jeffrey Tucker of the American Institute for Economic Research.  We chat with Jeffrey about his recently released book “Liberty or Lockdown”.

The interview is now available on the podcast which you can access through the RLA app.  If you don’t yet have the RLA app, you can download it by visiting www.RetirementLifestyleAdvocates.com.

“He that is good for making excuses is seldom good for anything else.”