I have frequently commented on my belief that the economy and financial markets are extremely artificial, with asset prices rising largely due to massive levels of currency created by the Federal Reserve.

I have often quoted the late economist Hebert Stein when it comes to currency creation.  Mr. Stein stated that “if something cannot go on forever, it will stop”.  That statement is as profound as it is simplistic.

As I’ve discussed in “Portfolio Watch” many times, currency creation will eventually cease.  It will end proactively or reactively – but it will end.

The question is that when currency creation does stop what will the economy and financial markets look like?  How will you be affected?

It is the answer to this question that matters.

In this issue of “Portfolio Watch”, we will consider the answer to this question.

John Wolfenbarger recently published a piece on this topic at Mises.org.  (Source:  https://mises.org/wire/four-reasons-next-recession-will-be-worse-last-one).  It is a well-done article.

In his article, Wolfenbarger notes, as I did in last week’s “Portfolio Watch” that stocks are extremely overvalued.

In last week’s issue, I noted that the increase in stock prices is very closely correlated to the Federal Reserve’s level of currency creation.

Wolfenbarger utilizes the most often cited market valuation metric, the “Buffet Indicator”, to make his case.

The chart (left) illustrates the Buffet Indicator, a.k.a. Stock Market Capitalization to Gross Domestic Product.  Note from the comments on the chart that stocks are now 30% higher than at the tech stock bubble peak in the calendar year 2000 and pushing twice as high as at the time of the financial crises. 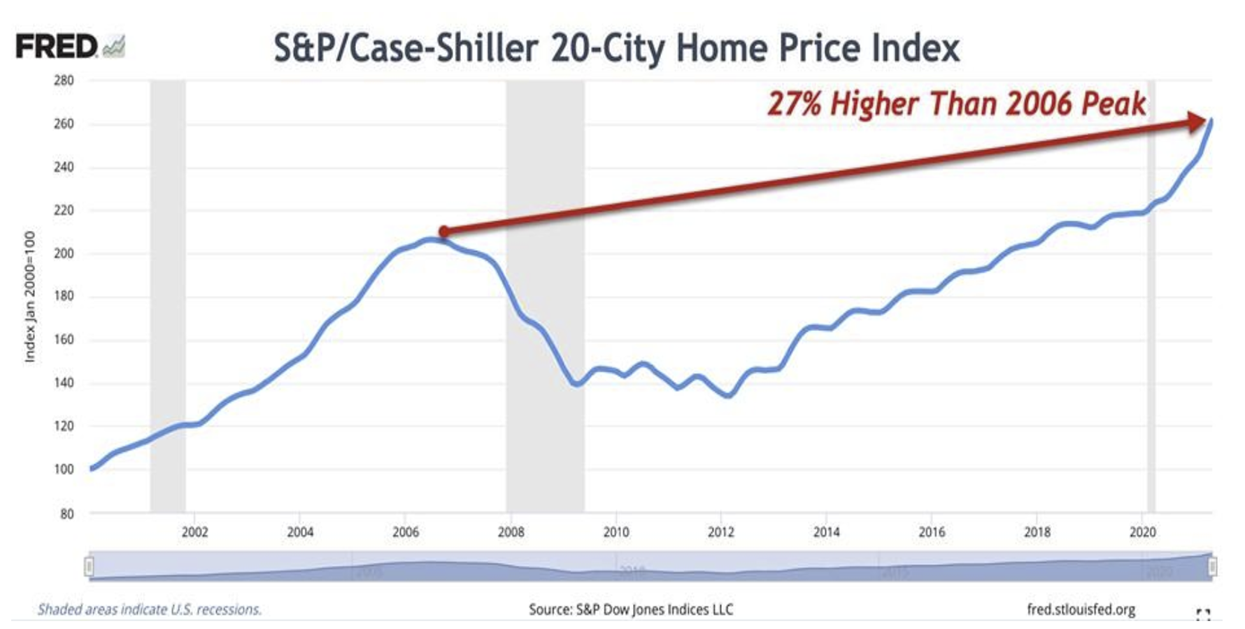 The point is that when the next recession hits, asset prices are more inflated than in the past significantly increasing the likelihood of a catastrophic decline in asset values.

Couple these abnormally high asset valuation levels with the fact that the US economy has weakened over the past two decades and we have the makings of a perfect storm when the next recession hits.

A weaker economy should not mean higher stock prices.  I’m certain that without the extreme easy money policies that the Fed has pursued over that time frame, asset prices today would be far lower than they are presently.

Here is an excerpt from Wolfenbarger’s article:

The US economy is not as strong as it used to be. That is certainly true in the wake of the covid pandemic, but it has also been true for the past two decades. All of the taxes, regulations, and other government interventions in the economy in recent decades have created a weaker and more fragile economy that will make the next recession even worse. 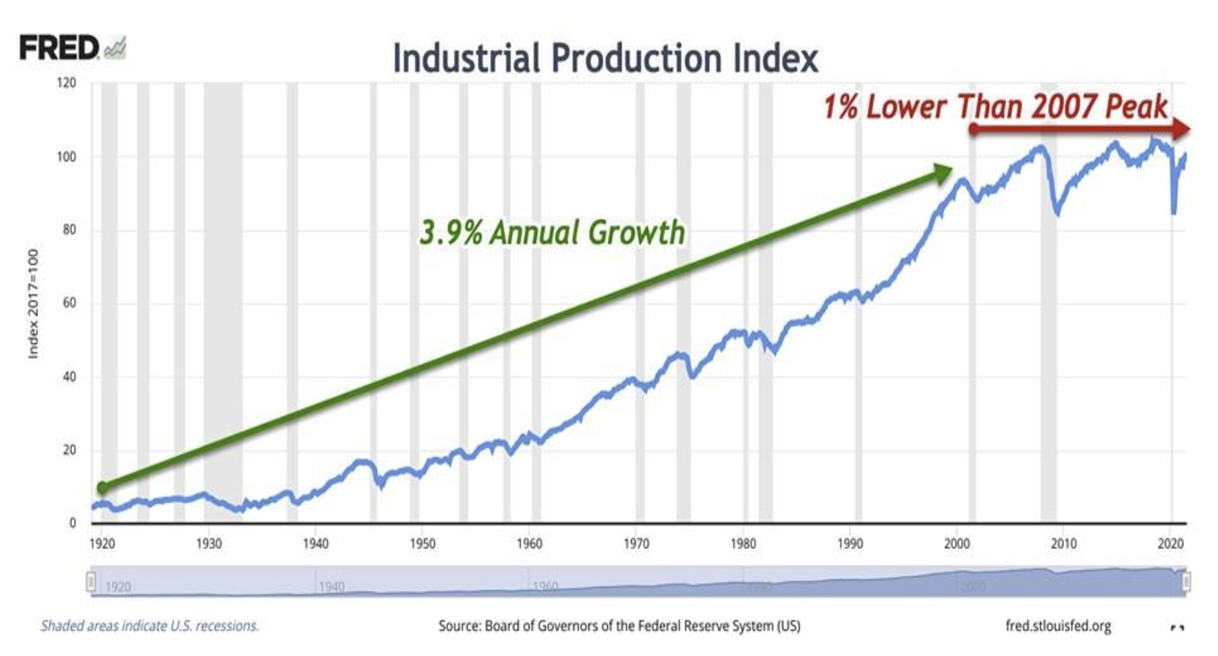 Consider that for a moment.  Asset prices are at all-time highs and industrial production has declined since the financial crises.

That’s economic math that doesn’t add up and it goes a long way to proving my point that the current environment is artificial.

Wolfenbarger puts it this way:

Excessive debt has been the problem with every financial crisis in history due to prior money creation out of thin air, so the next one promises to be one for the history books, given these unprecedented high debt levels. Debt liquidation and defaults will lead to deflation, as we saw in the Great Recession and even more so in the Great Depression.

I have frequently quoted Thomas Jefferson who noted that if the American people ever allow private banks to control the issue of their currency, first by inflation then by deflation, the banks and corporations that will grow up around them will deprive the people of all property until their children wake up homeless on the very continent their fathers conquered.

We are seeing inflation presently; extreme deflation will have to follow at some future point to purge the excess debt from the system.

Finally, Wolfenbarger makes the point that the Fed is out of policy options.

But money created out of thin air does not create new goods and services that improve living standards. If it did, a place like Zimbabwe would be the wealthiest country in the world. However, newly created money can flow into financial assets, which helps explain why their valuation levels are so high.

money supply that is consistent with this Austrian school of economics definition (although it no longer includes traveler’s checks, which have been discontinued in the Fed’s database due to limited use these days). AMS is up 40 percent since February 2020 and is up an astounding 225 percent since the Great Recession ended in June 2009!

This is well above the money supply growth that drove the Roaring Twenties and ultimately led to the Great Depression of the 1930s, as detailed in economist Murray N. Rothbard’s definitive history of that period, “America’s Great Depression.”

The “Revenue Sourcing” planning process hedges for inflation and deflation.  I believe it is the only way to survive the coming recession.

Mr. Kirby does a deep dive into the work of Dr. Mark Skidmore and Kathryn Austin Fitts about money missing from the government’s books.

You’ll want to catch this conversation by listening to the podcast.  Click on the "Podcast" tab above and listen in. It’s a fascinating, thought-provoking discussion that you won’t want to miss.

“Everyone has a right to be stupid.  Some just abuse the privilege.”