Last week, I offered practical evidence that the US economy was in recession citing the examples of FedEx pulling its 2023 earnings guidance and the ‘unretirement’ trend that is now picking up steam.

If you are among those who are of the belief that the long-held and widely accepted definition of a recession (two consecutive quarters of economic contraction) no longer applies, the real-world facts don’t support such an idea.

This week, I’ll present some evidence that the real estate market is on the heels of the stock market, ready to move significantly lower.

Incidentally, year-to-date, the Standard and Poor’s 500 is down more than 22% by my measure.  I expect that stocks will ultimately go lower and the evidence suggests that real estate is now following suit.

Wolf Richter gathered some data this past week on the current state of the real estate market (Source:  https://wolfstreet.com/2022/09/21/housing-bubble-woes-home-prices-drop-3-5-steepest-monthly-drop-since-jan-2016-sales-already-at-lockdown-levels-drop-further-active-listings-rise-further/)

In July and through mid-August, mortgage rates fell sharply from the 6%-range in mid-June, on the widely propagated fantasy of a Fed “pivot” on rate hikes. By mid-August, the average 30-year fixed mortgage rate was down to 5%. Yesterday, they were at 6.47%. But the brief interlude of dropping mortgage rates slowed down the decline in home sales – sales declined again in August from July but at a slower rate – with Realtors in mid-August talking about the market waking back up.

But prices backed off for the second month in a row, and in a big way, amid widespread price reductions, and that also helped get some deals done.

The median price of existing single-family houses, condos, and co-ops whose sales closed in August dropped a hefty 3.5% in August from July, the largest month-to-month percentage drop since January 2016, after the 2.4% drop in the prior month, to $389,500, according to the National Association of Realtors. While there is some seasonality involved, the percentage drop was much bigger than normal in August, whittling down the year-over-year price increase to 7.7%, down from the 25% year-over-year increases last summer (data via YCharts): 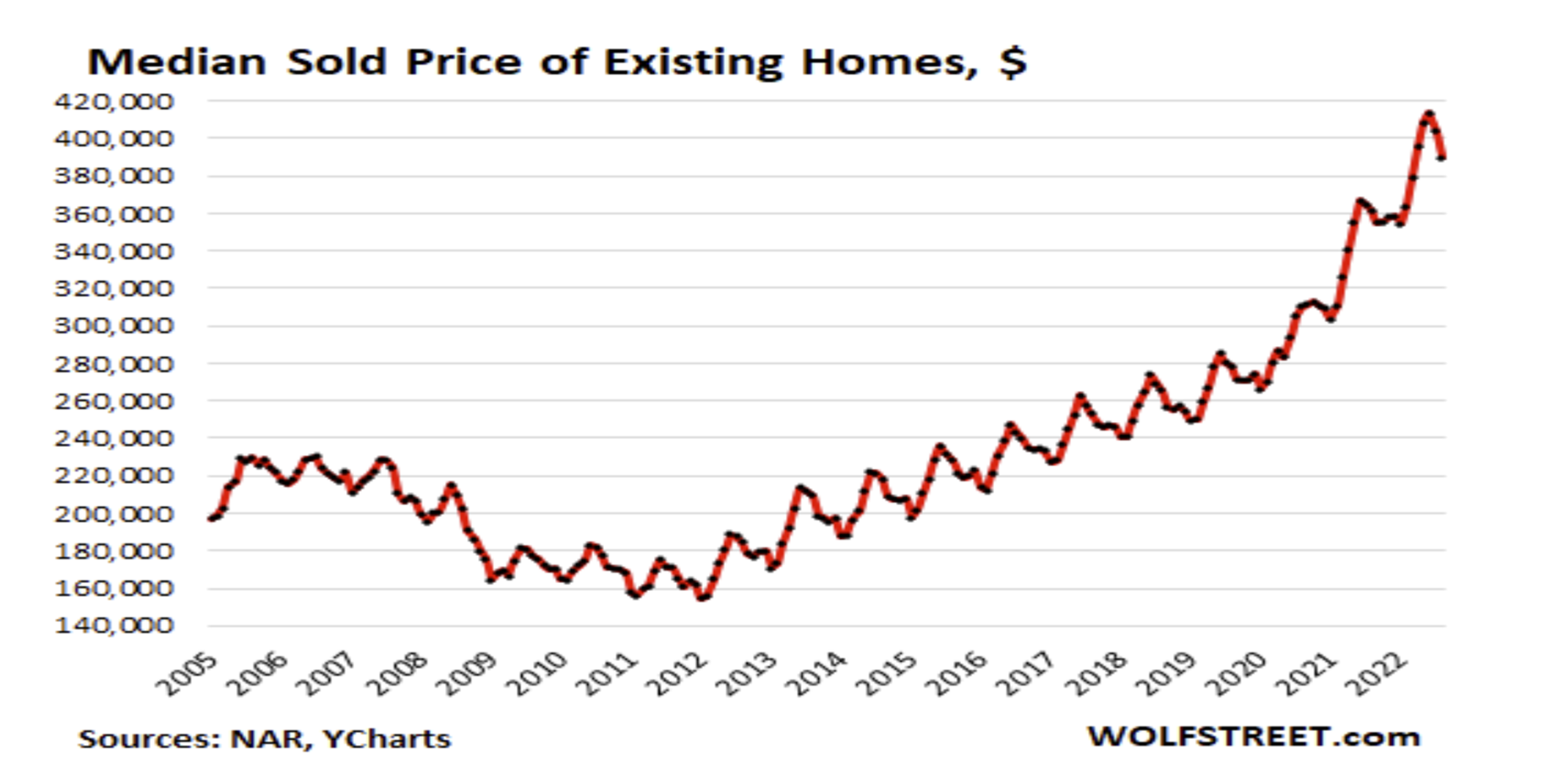 In the West, price drops are further advanced, amid dismal sales. For example, in San Francisco and in Silicon Valley, median prices have plunged in recent months – now down on a year-over-year basis in San Francisco and Santa Clara County (San Jose) and up just a hair in San Mateo County, according to data from the California Association of Realtors.

Sales of existing houses, condos, and co-ops across the US dipped a smidgen from July, after the 5.9% plunge in the prior month, to a seasonally adjusted annual rate of sales of 4.80 million homes, roughly level with lockdown-June 2020, according to the National Association of Realtors in its report. This was the seventh month in a row of month-to-month declines.

Beyond the lockdown months, it was the lowest sales rate since 2014, and down by 29% from October 2020 (historic data via YCharts).

Sales of single-family houses dropped by 0.9% in August from July, and by 19% year-over-year, to a seasonally adjusted annual rate of 4.28 million houses.

Compared to August last year, sales fell by 20%, the 13th month in a row of year-over-year declines, based on the seasonally adjusted annual rate of sales.

Sales volume has been low because potential sellers are clinging to their aspirational prices of yesteryear when mortgage rates were 3%, and many would rather keep the home off the market or pull it off the market than sell for less, for as long as they can. But price reductions have now taken off by sellers who want to sell.

Price reductions started spiking in May from record low levels last winter and spring as sales stalled, and as mortgage rates surged. In July, they reached the highest level since 2019, according to data from realtor.com. In August, price reductions dipped just a little as sellers might have felt that price reductions were less needed, amid the declining-mortgage-rate-Fed-pivot fantasy in July and August.

Active listings – total inventory for sale minus the properties with pending sales – rose to 779,400 homes in August, the highest since October 2020, up by 27% from a year ago, according to data from realtor.com: 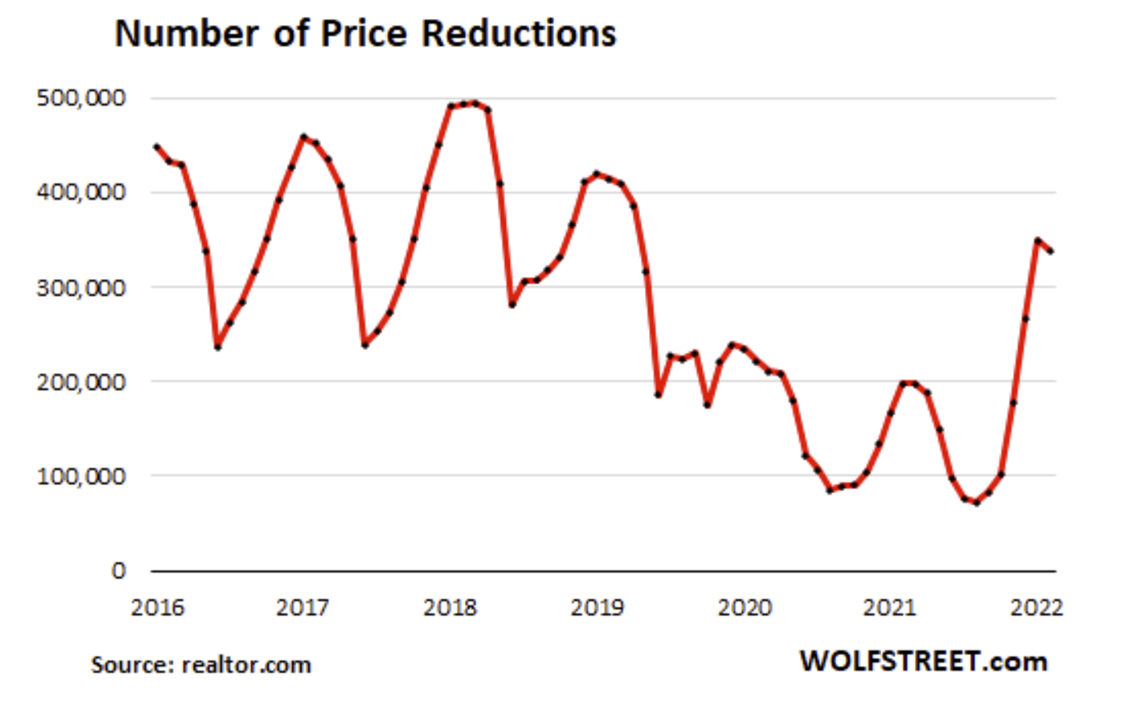 nal Association of Realtors is clamoring for more single-family houses to be built. But homebuilders, they are having trouble selling the houses that they have already built or are building, sales have plunged, inventories have spiked to the highest since 2008, and homebuilders have started cutting prices, buying down mortgage rates, and piling on other incentives to get their inventory moving. 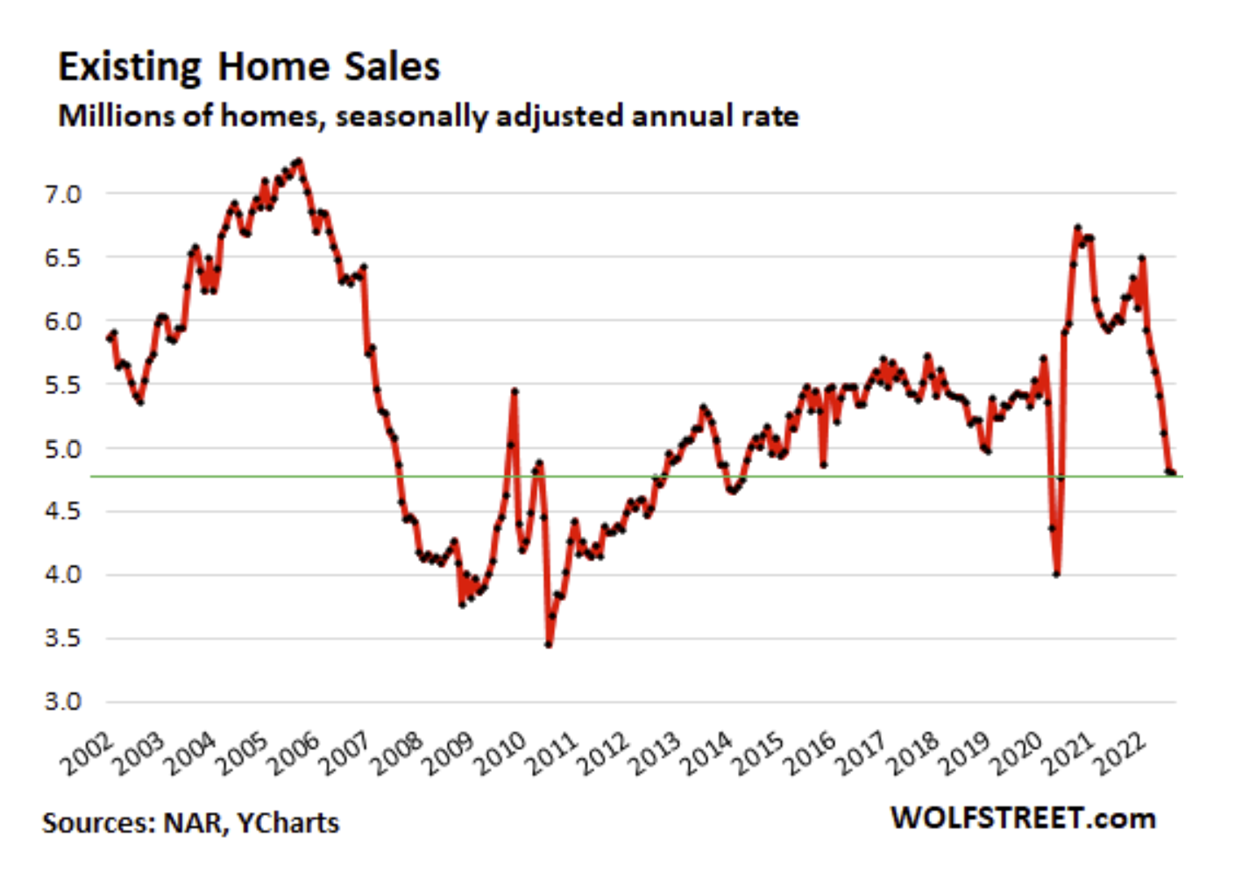 If you read that carefully, you noted an amazing statistic – inventories of ‘spec’ houses are now at the highest level since 2008 which saw the worst of the Great Financial Crisis.  At that point, housing prices had already experienced a big decline.  Now, we find ourselves in a similar situation and it seems we may be at the onset of the housing price decline.

I expect it to be severe.

On the program, I chat with Brien about his forecast for the economy, financial markets, and precious metals. You can listen to the show now by clicking on the "Podcast" tab at the top of this page.

“An investment in knowledge always pays the best interest.”