As I was doing the research this week that I do every week, it struck me as to how tightly correlated the performance of stocks is to the balance sheet of the Federal Reserve. 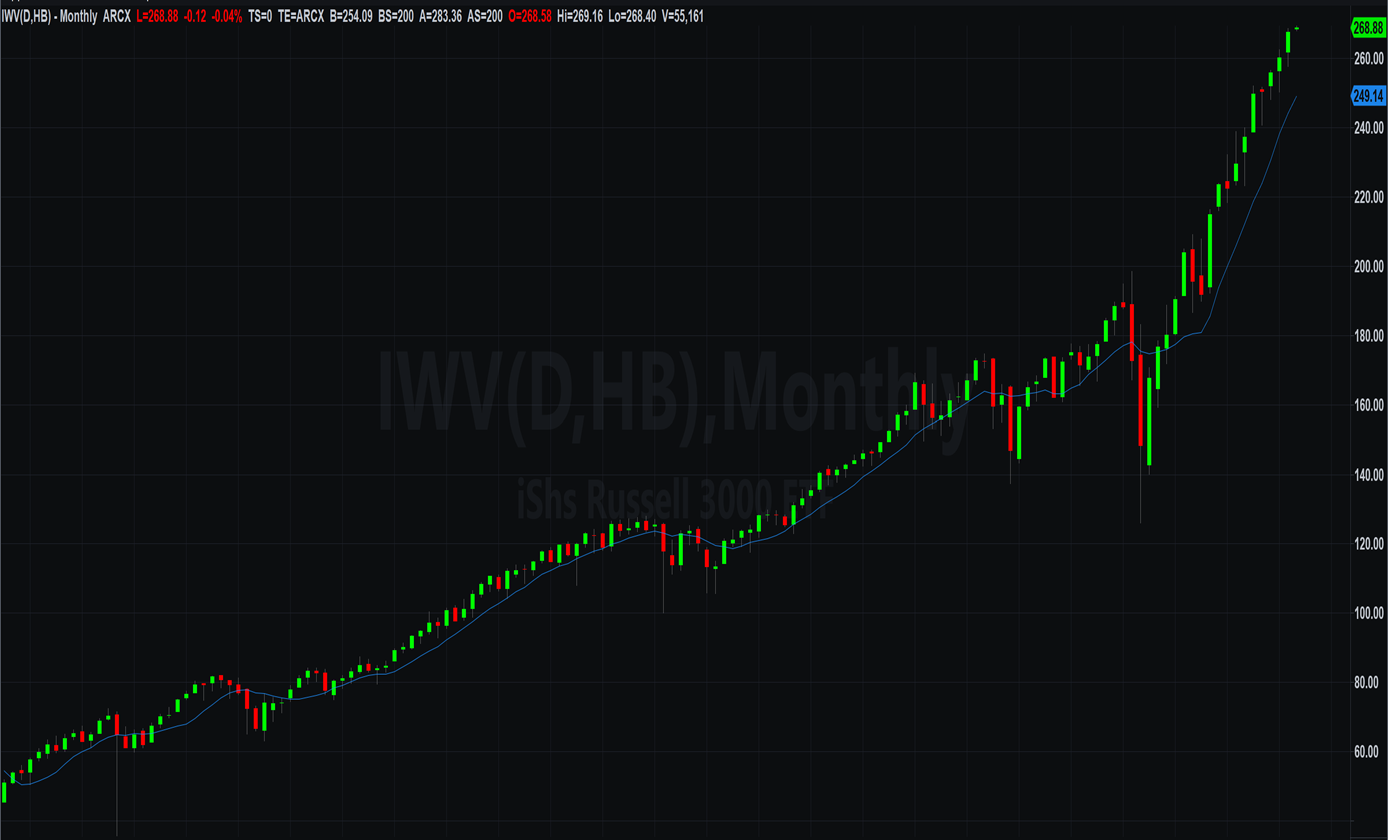 The chart on the left is a chart of an exchange-traded fund that tracks the performance of the Russell 3000, a very broad stock market index.

The most recent low on the chart is the market bottom of March of 2009.  Since that time, as you can see from the chart, stocks have moved up significantly; the chart pattern is nearly vertical. 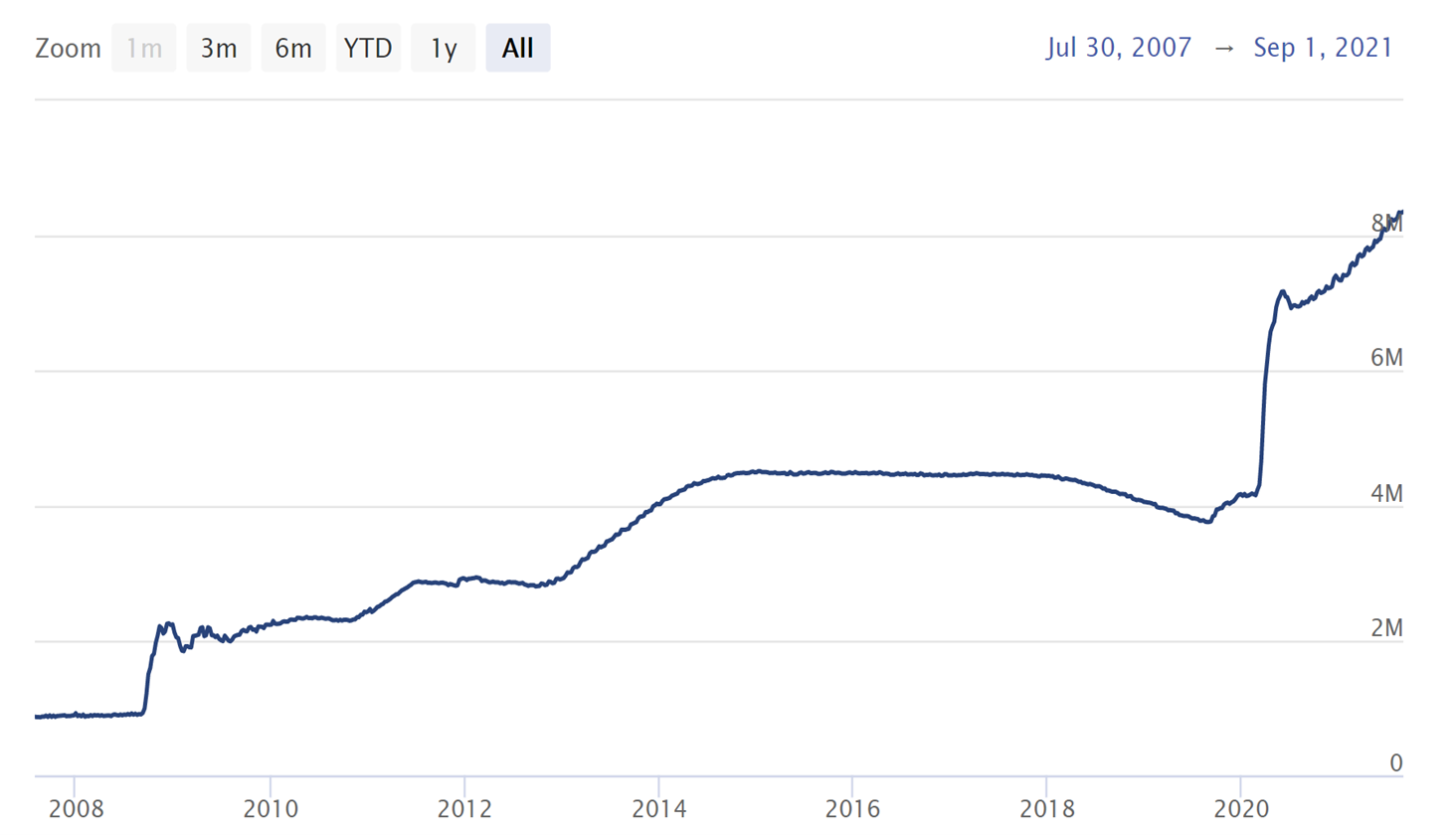 Notice the correlation between currency creation by the Federal Reserve and the parabolic rise in the price of stocks.

On my radio program, I’ve gone on record stating that it is my belief that the Fed’s taper talk is just talk.

In short, McMaken points out that the Fed’s “dual mandate” of keeping prices stable and maintaining full employment is really not the point any longer.

Here is a bit from his piece (Source: https://mises.org/wire/how-fed-enabling-congresss-trillion-dollar-deficits) (emphasis added):

If all this spending were just a matter of redistributing funds collected through taxation, that would be one thing. But the reality is more complicated than that. In 2020, the federal government spent $3.3 trillion more than it collected in taxes. That’s nearly double the $1.7 trillion deficit incurred at the height of the Great Recession bailouts. In 2020, the deficit is expected to top $3 trillion again.

In other words, the federal government needs to borrow a whole lot of money at unprecedented levels to fill that gap between tax revenue and what the Treasury actually spends.

Sure, Congress could just raise taxes and avoid deficits, but politicians don't like to do that. Raising taxes is sure to meet political opposition, and when government spending is closely tied to taxation, the taxpayers can more clearly see the true cost of government spending programs.

Deficit spending, on the other hand, is often more politically feasible for policymakers, because the true costs are moved into the future, or they are—as we will see below—hidden behind a veil of inflation.

That’s where the Federal Reserve comes in. Washington politicians need the Fed’s help to facilitate ever-greater amounts of deficit spending through the Fed’s purchases of government debt.

That sounds easy enough, especially when interest rates are very low. After all, interest rates on government bonds are presently at incredibly low levels. Through most of 2020, for instance, the interest rate for the ten-year bond was under 1 percent, and the ten-year rate has been under 3 percent nearly all the time for the past decade.

But here’s the rub: larger and larger amounts put upward pressure on the interest rate—all else being equal. This is because if the US Treasury needs more and more people to buy up more and more debt, it's going to have to raise the amount of money it pays out to investors.

Think of it this way: there are lots of places investors can put their money, but they'll be willing to buy more government debt the more it pays out in yield (i.e., the interest rate). For example, if government debt were paying 10 percent interest, that would be a very good deal and people would flock to buy these bonds. The federal government would have no problem at all finding people to buy up US debt at such rates.

But politicians absolutely do not want to pay high-interest rates on government debt, because that would require devoting an ever-larger share of federal revenues just to paying interest on the debt.

For example, even at the rock-bottom interest rates during the last year, the Treasury was still having to pay out $345 billion dollars in net interest. That’s more than the combined budgets of the Department of Transportation, the Department of the Interior and the Department of Veterans Affairs combined. It’s a big chunk of the full federal budget.

Now, imagine if the interest rate doubled from today's rates to around 2.5 percent—still a historically low rate. That would mean the federal government would have to pay out a lot more in interest. It might mean that instead of paying $345 billion per year, it would have to pay around $700 billion or maybe $800 billion. That would be equal to the entire defense budget or a very large portion of the Social Security budget.

McMaken makes a great point.  Politically speaking, it would be a major problem for the Fed to taper and/or raise interest rates.

So, the Fed will likely continue on their current unsustainable course until things blow up.

Going back to the ‘dual mandate’ of stable prices and maximum employment, it’s now obvious that the first objective of stable prices is out the window.  The inflation genie is now fully out of the bottle.

Prices are rising across the board in nearly every category of spending.  Looking past the heavily manipulated inflation reporting metric most often used to report the headline inflation rate – the Consumer Price Index – one finds the actual, real-world inflation rate is 12% or 13% per annum.

The Fed may have gotten some cover this past week for staying the course.  The jobs report was a huge disappointment to the downside.  This from “Zero Hedge” (Source:  https://www.zerohedge.com/markets/goodbye-taper-huge-jobs-miss-us-adds-just-243k-jobs-august):

Moments ago the BLS reported that in August just a paltry 235K jobs were added, far below the 725K expected below even the most pessimistic forecast; the number was not only a huge drop to last month's upward revised 1.053MM but was the weakest print since January.

While we expect that the pundits will quickly blame the resurgence of covid in August, manifesting itself in zero jobs added in leisure and hospitality, with Bloomberg already busy spinning by saying that "the deceleration in hiring likely reflects both growing fears about the rapidly spreading delta variant of Covid-19 and difficulties filling vacant positions" the reality is that the US economy is rapidly slowing even as inflation continues to soar, positioning the US squarely for a stagflationary crash and putting the Fed's tapering plans squarely in doubt.

The economy is slowing.

Even mainstream forecasters are revising economic growth estimates downward.  In the “Zero Hedge” article referenced above, it was noted that Morgan Stanley cut its 3rd quarter GDP growth estimate to 2%.

This week’s radio program features an interview with Mr. Alasdair Macleod, head of research at Gold Money.  Alasdair provides his excellent analysis of Fed policy and what it likely means for stock performance and precious metals prices moving ahead.

You won't want to miss this conversation. Listen to the podcast now by clicking on the "Podcast" tab at the top of this page.